Rich had been in touch with Andres, the young man that we met at Hotel LunaSol in Playa del Carmen, by email a few times while we were still living in the States. Once we got here to Merida and I got the blog up and running, Rich again reached out to Andres to let him know about the blog and that plans had changed and we were not living in Playa del Carmen, but in Merida. Rich had received an email back from Andres, who had not gotten the emails that were sent from Florida, but he said that he and Jade would be coming to Merida for two days and they wanted to meet with us. It was a total coincidence that they would be in the area within the next few days, so we made plans and met them at the El Gran Museo del Mundo Maya de Merida Museum AKA: The Mayan Museum (more to come on the Mayan Museum). The Mayan Museum was very interesting and we learned so much about Mayan culture and lifestyle.

It was so nice to meet with Andres again……My first Playa friend!! And with Jade, my second Playa friend….LOL!!  Actually, they were our very first Mexican friends too!!   It was a bit strange that even though we could easily be their parents, with the age difference, we all got along so well and really enjoyed our time together.
After the Mayan Museum, we went to Costco which is right around the corner. I bet you are thinking why would they go to Costco? Well, it turns out that our Costco in Merida is the only Costco in the world that has a cenote!!  What is a cenote you ask?  Per Merriam-Webster, a cenote a deep sinkhole in limestone with a pool at the bottom that is found especially in Yucatán and also in Quintana Roo.  There are many cenotes where you can go to swim and enjoy the cool fresh water, but the one at Costco is only to look at and enjoy!! 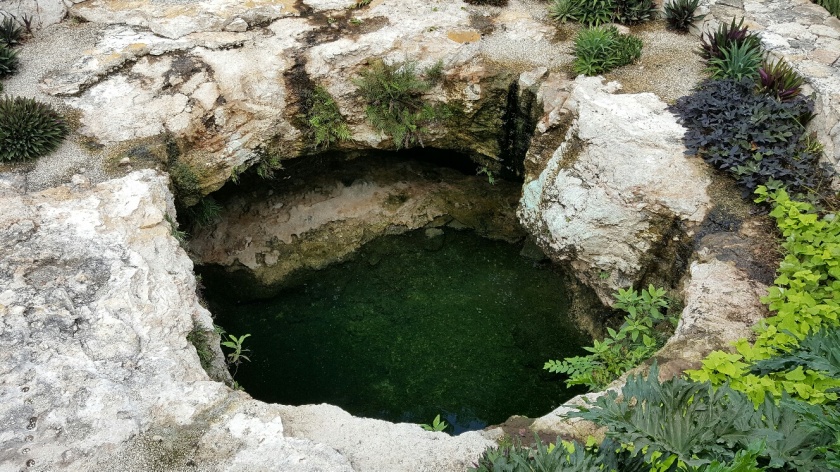 After visiting the cenote, we went and had a lovely dinner with Andres and Jade at one of our favorite restaurants, Los Trompos.   It was so nice talking and getting to know them and having someone who understands what we are trying to say in English!!

Actually, they are both multilingual as Jade is French, so I know they both speak English, Spanish and French and maybe more!!  I had one year of French in high school, one year of Spanish in College and Rich had three years of Spanish and take it from me, it does not come back after all that time!!  Learning Spanish has been tough for both of us!!

After dinner, we went downtown (Centro) where there is always something going on.  We went to Santa Lucia park where we thought we would see the Yucatan dancing.

But I think we were at the wrong part of the park and instead we heard many Yucatecan men playing guitar music.  It was really beautiful and we had a good time, but I was hoping to see the dancers, so maybe we will see them next time.   Merida is a very beautiful and cultural city and every night they have different shows to watch in the different parks, so there is always something to do!!

The next day we took Andres and Jade to the Plaza Grande (which I went over on page #24).  It was a beautiful day and we enjoyed walking around and checking out the sights. 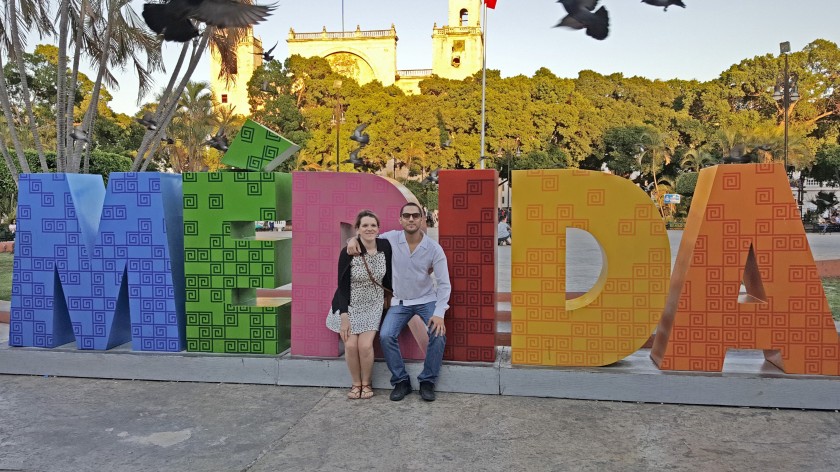 Later we walked to a nearby restaurant called Mercado 60 that Andres picked out.  It was really a neat place, sort of like an upscale food court, where you can get anything from burgers to pasta to sushi to sandwiches and everything in between.   We got there early, so we did not get to hear the music, but we did find the best burgers in Merida!!

A great time was had by all!!